I’m just a very confused one.

If I were to list my relationship with pain a la FetLife, it would say “It’s complicated with”. No lie, it’s more screwed up than a Jerry Springer trailer trash reunion.

Makes your brain itch, doesn't it?

I enjoy certain kinds of pain. Take me to task with a heavy flogger and I’m blissing on the punches. Slap my cunt and I’m wetting myself. Choke me, slap me…we are going to need a puppy pad for the bed. For these activities, I am a masochist. Oh hells yeah. The more, the better. 🙂 I’m a greedy one, apparently.

It’s when we start talking about canes, stingy pains and electricity that we start wading into downright “don’t wanna” territory. Unfortunately, “don’t wanna” only applies to half of my brain – the logical half, which is often overruled by the “lacking survival tactics” half.

I hate stingy pain. Really really. It makes me want to rise up and do very nasty things back to whoever is hitting me. Crops, mean sticks, hand paddling, hard paddles…anything that leaves bad welts is going to require that I be bound if you want to do it. I have ripped my hand out of a rope tie to try and get at N as He went after me with a heavy paddle.

What part of hitting me with that seemed like a good idea?!

But it is the stingy pain, the unbearable “I will fucking kill you if I can get out of this!” pain that gets me where I want to be after a heavy session…the tired, grateful, calm and owned feeling, a sense of acceptance and completeness, something that can reach into my soul and soothe the rankles. A good flogging doesn’t do that. Face slapping (as we have done it so far) doesn’t do it. Choking/smothering can do it if we do it face to face and He whispers those nasty loving things into my ears as I’m starting to fade away…

Oh, right. I don’t know what it says about me, or my personality, as a slave that a good sound thrashing brings me inline with my desire to be a slave to Him better than any pep talk or shaming. But I know it has a definite effect on me, because when we go for months without any kind of S/m activity I get resentful and lonely. I miss the feeling of being smaller, of being broken, of being aware of just how badly He could fuck me up, knowing that it is because He chooses not to that I’m still the whole and healthy being typing away right now.

It lets me brush my fingers against mortality, against tainted love, against deadly desires. That moment of exhilaration where He balances us on the brink of sadismgonewrong and pulls me back from the edge. 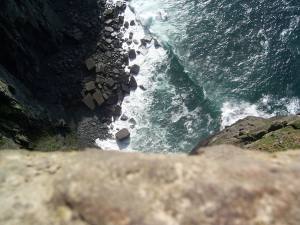 I think we all know what happens at the bottom...

Maybe I am a risktaker after all. Wouldn’t everyone else who knows me vanilla-wise be shocked. The steady plodding Taurean, a risktaker? Naw!

8 thoughts on “I’m Not A Reluctant Masochist!”